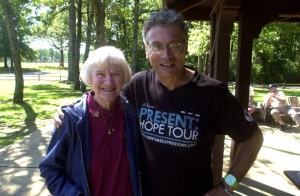 While in Tuscaloosa, Jeff had the privilege of talking with Brunhilda. She was one of the parishioners of the Lutheran church that invited the team to a picnic in the park. Brunhilda had a deep accent that Jeff said was hard to understand, but she soon had him absorbed in her story.

Brunhilde was born in Austria and lived there until she was taken by the Nazi’s during WWII. They took her to Berlin and forced her to broadcast messages to the Luftwaffe (the German Airforce). She hated the work. When the Nazi officers were in the room, she was required to salute. In her own act of rebellion, as often as possible, she would go to the back of the room so she would not be noticed and not have to give any respect to the officers.

Brunhilde was also responsible for sending messages using the Enigma machine. It was a coding device that the Nazi’s used to send messages back forth. It automatically translated messages into a code and sent an electronic message to a receiver. She was a pawn in the war, forced to help men she hated. But she lived through it.

After the war, Brunhilde made her way back to Austria. She went to college, eventually married an American and moved to the states where she has lived a quiet life as a college professor. But her time in Berlin has not dimmed over the years. She is thankful to have survived to tell the story.

Jeff really enjoyed getting to know her. Her accent was a barrier to getting more information, but her warm spirit and twinkling eyes made his day. Jeff is a  history buff and WWII is the time he has studied the most. This was a fascinating encounter for him. He will never forget Brunhilda.

You never know what you’ll find on the road to Atlanta!